Well Islamic roots are spreading fast all around the world and more and more people are embracing Islam everyday and are intending to practice the true religion. Yet Islam faces many attacks from Inside and Outside. According to Some Sources the Highest number of books written are anti-islamic in order to distract Muslims and People from the right path.

An Anti-Islamic Sites loves to tease Muslims by stating about the Jihad attacks Happened in particular Cities. Firstly I wanted to tell the owner of that website that what is Jihad and to remove his damn misconceptio

Jihad means struggling in the name of Allah Almighty. Jihad doesn't always mean a war or battle. Any mean for spreading Islam and the Truth, or to fight for what is right and condemn what is wrong (such as fighting the bad and helping the oppressed even if they were not Muslims) are considered Jihad.
I am doing Jihad right now by posting about islam, because it is a tool that can be used for spreading Islam and the Truth. And because it is also a Media tool, it could be used for fighting for what is right and condemning what is wrong.
Moreover, Let me tell the owner of religionifpeace.com that Jihad is not against Muslims which he thinks, Jihad doesn't means "Killing Inncoents" Peoples.

Quran says in 2:256
There is no compulsion in religion. Verily, the Right Path has become distinct from the wrong path. Whoever disbelieves in Tâghût (false worship or idols)and believes in Allâh, then he has grasped the most trustworthy handhold that will never break. And Allâh is All-Hearer, All-Knower

Al-Bukhari Hadith
Ibn `Umar (May Allah bepleased with them) reported: Messenger of Allah (PBUH) said, "A believer continues to guard his Faith (and thus hopes for Allah's Mercy) so long as he does not shed blood unjustly".

Now to refute some claims of that evil anti-islamic site

The religionofpeace.com list something called Jihad attacks , and I bet they didn't even know the meaning of it. These aren't even Jihad attacks because in these attacks Muslims are targeted ? How can a Muslims do Jihad with a Muslims?
Seriously, that evil website only translates the word "JIHAD" as killings and killings. Well it mostly means "Fight for what is right and condemn what is wrong"

In there "List of Islamic Terror Attacks" they have posted about an attack In a Pakistani city Quetta , District Faizabad. (Below is an extract) 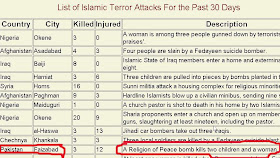 In the discription of the attack the website wrote "A Religion of Peace bomb kills two children and a woman."
Well They actually don't know that the victims were Muslims. There is no such things like Jihad against Muslims. Moreover here is the correct News what had happened
Read: Dawn News Quetta Blast!

I wonder why didn't the owner wrote "Two militants identified as Gulshan and Abdul Malik were killed in the firing and Tariq sustained injuries."
He must be in favour of militants. However, the news says that the man was killed becasue of the cross-fire between the militants and tribal volunteers.
Secondly, those killed were all Muslims and I stated above Jihad is not against "Muslims" and nor does it mean killing Innocent People.

If they want proof that Jihad doesn't means killing Muslims here it is :

Quran 4:93
"And whoever kills a believer intentionally, his recompense is Hell to abide therein; and the Wrath and the Curse of Allaah are upon him, and a great punishment is prepared for him"

I would like to tell something to the owner of religionofpeace.com. Who tell him that Jihad means
1. Killings innocents humans
2. Spreading Bloodshed in land for no reason
3. Killing a Muslims/Non-Muslim Unjustly

Allah says in Quran 2:190
"Fight in the cause of Allah (Only to) those who fight you, but do not transgress limits; for Allah loveth not transgressors."
The shortest meaning of this verse is : "Warfare in self defense, Allah does not like transgressors."
And there are many false claims of thereligionofpeace.com to dwindle Muslims believe.
I ask religionofpeace.com why they don't posts the sources with there "Terror Attacks". They only provide sources Individually either by making false reports themsleves or from similar sites.

Since the "List of Jihad Attacks" of religionofpeace.com failed to provide evidence sources. What they really do is

I can expose their many lies as I expose two of them above. What really happened and what they really wrote.
I challenged the owners of religionofpeace.com that to bring one authentic hadith or ayat which confirms that killing Muslims, Non-Muslims and other Innocent Peoples is Jihad ?
Allah Knows the Best